Welcome to the Trimetals Blog

Where’s best to keep your bike?

Cycling has enjoyed something of a renaissance recently, with a growing number of people across the world opting for pedal power over other methods of transportation. It’s not difficult to see why, either. As the population rises, roads get busier; the costs of driving and using public transport are growing too.

In a bike, you have a means of getting from A to B cheaply and quickly without impacting the environment. Throw easy exercise into the mix and it’s a no-brainer! When you’ve spent big on some new wheels, though, you’ll want to keep it safe at all times. That means thinking carefully about where you store it. [read more...]

How to Secure Your Bike Outside

Did you know that nearly 400,000 bicycles are stolen every year in the UK? That means that once every 90 seconds, a bike is taken from an unsecured shed, a front garden or from a public location.

There is no ‘might’ about it – if you don’t properly secure your bike, it will get stolen sooner or later. Here is what you can do to deter the thieves and stop your bike from becoming an easy target. 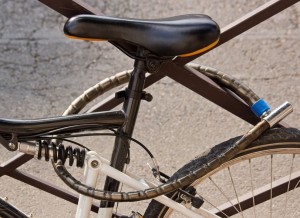 The key thing to remember about any thief is that they need to work quickly. They want to get in and get out fast, as it reduces the chance of them being caught. A weak, cheap padlock will break within seconds; if you invest in a stronger lock, though, it will take them much longer to remove it from your bike. This will make them more likely to abandon your bike and try another. [read more...]

A bike can be a great investment. With more and more cars clogging up our roads, what better way to get from A-B than cycling? Benefits include fitness and cost-efficiency among so many others.

Once you’ve covered the initial purchase price, your running costs are pretty close to nothing, but with bicycle theft still rising across the UK, you’ll want to keep your new ride safe at all times. So how do you go about storing it at home?

You have a few bike storage options, each with their own pros and cons, so let’s get down to comparing them. [read more...]

Better safe than sorry! – Three tips for securing your garden

Of all the items that can be stolen from an individual’s property, gardening tools and equipment are perhaps the easiest for prospective thieves to take. They generally offer a good level of value to thieves, with minimal risk involved in the act of theft, especially when compared to items of comparative worth that are contained within your house.

To counter this risk, we’ve collected some useful tips on how to best protect your garden, along with the tools and equipment stored within, from thieves. [read more...]

Wooden and plastic sheds vs metal sheds – how they compare

Purchasing a shed can be a great way to add much needed storage space to your living quarters. However, choosing which type of shed to use can be a difficult and confusing decision.

We’ve listed the pros and cons of each type of material to help you find which shed is best for you.

A wooden shed is the most traditional of the three and can be customised to create a very specific size or shape.  They can be painted any colour to match your house or surroundings, and they can easily be dressed up with unique features such as trellising  or window flower boxes. [read more...]

We are pleased to be working alongside Thames Valley Police to keep bicycles safe and secure with the Trimetals Protect a Cycles Pro range.

The Thames Valley force has installed Trimetals cycle stores at the new neighbourhood police office in Great Missenden, Buckinghamshire. When the station was relocated from a site which had a structural garage, to a new facility where space was more limited, secure cycle storage became a must-have. In terms of security, Protect a Cycle Pro simply cannot be bettered. [read more...]

Storage Box or Shed – Which is best for my garden?

With the rate at which everyone accumulates possessions seeming to increase exponentially, it’s fair to say that in today’s world, space is at a premium.

This is no different in the garden, as space can quickly be eaten up by large equipment (lawnmowers, hedge trimmers), garden furniture (lounge chairs, picnic tables) and sporting equipment (football nets, bikes).

One of the most obvious (and certainly most effective) fixes for a cluttered garden is to store the offending items in some form of garden storage solution. [read more...]